OK seriously, I do enjoy the mohawk sensations. On a hot day, sitting near an AC unit or duct pointed at my head is AMAZING.

I thought I should update because it’s been a few weeks, but even after a few days of on-and-off thinking I haven’t come up with what to talk about. I’ve been planning a project that I originally intended to take root in October (but may be pushed to November, if done at all) centered on a specific theme woven through multiple games, but it isn’t making the progress that would be best for such an undertaking. Work on the manuscript has been spotty, but it is coming along, even though I might owe a friend some money at the end of the year. There’s a game for review in my hands, so I’ve been plugging away at that so it’s ready for review time, and the occasional stand-up event going on.

Thinking about it now, maybe I should take a trip down memory lane to see how I reached the point I’m at today: thinking about the blog over three years of (mostly) consistent writing. It’s amazing what can be learned when teaching yourself.

In the summer of 2011, I bought my first domain. It was the sort of thing I did on a whim, the whole idea being to do something I’d never done before. I had started blogs before, but this time it was different… by buying the domain I was investing in something. Not happy to hop on a free service’s subdomain (nothing wrong with that), I needed the tangible thing I would no longer have in my pocket to help motivate me to something more. My past personal blogging was littered with the who’s-who of freebie sites – Xanga, LiveJournal, Blogger, WordPress, Weebly. They all worked, but I wanted more.

After buying the domain and posting a few times, it languished. It looked cheap, it felt cheap, and… it was cheap. I’d “built” websites before even, I knew an amateur’s amount of code, but that’s been relegated to the text box in the early days of HTML 5 and the prevalence of CSS. Really, all my first site had going for it was a few pictures of myself and a wandering, unfocused voice. A few posts in, and I went a month until posting again. Then two months. Then more.

But in late March of 2012, I lost my job. Outside of my freelance work I was the packing department of a small online book store. And when that was over, I took a few days to process, finished the game I had for review, and I started submitting applications to get employed again. But about the same time, I wrote up a post about starting over. And I didn’t know quite how right I was about that.

So I wrote about it. Then the next day, I wrote another something. And then another. With the exceptions in the first month of so for a fellow writer’s death (Windy, you aren’t forgotten), my grandfather’s death (Richard was a good man), and the “holiday” of Easter (I decided to take a day off), I took on the task of submitting applications in the mornings and writing in the evenings and afternoons. The first month or so was filled with posts about the search for work, how my reviews were going, a bit of my personal history. I even touched on how I was religiously raised and my development of atheism, which I would like to write about again now that I have a better grasp on both my thoughts and story structure.

A few months in, and my emotional state was starting to suffer. Being let go from a job hurts not only one’s wallet, but their ego as well, and turning in application after laborious application without any response only exacerbates the problem. With few responses and even fewer interviews, the shame was building in my mind. I wouldn’t spend money on anything frivolous, with the sole exception of a good sandwich when my unemployment check would clear. I would only go outside after six o’clock in the evening so my neighbors wouldn’t be suspicious that anything might be wrong. I wasn’t sleeping well, but I was sleeping long hours, and occasionally pulling all-nighters just for the hell of it, which didn’t help my mind any. I felt like I was slowly unwinding and falling apart.

But still, I wrote. I wrote about the Fukushima Daiichi plant beginning to melt down. I wrote about E3 for Game Revolution, then got home and wrote more on my site. I took down the bulk of Wayne LaPierre’s speech for the NRA a few days after the Newtown massacre and addressed it point for point. I reviewed both Ted and Sleepwalk With Me days after they came out with the intention of developing my critical chops. I read the hell out of a bunch of Amazon Kindle sample books, and I watched every documentary I found even remotely interesting on Netflix. And then I wrote about those.

My writing got better. The best compliment I remember receiving during that time in my life was an old co-worker and friend telling me maybe seven months in that he’d read my blog on and off, and that my original posts were CRAP. Almost unreadable, bland, just what someone would expect through a site that looked like mine did (I’d since made it over and cleared a few things up… still amateur, but amateur-with-style). But that the writing was gradually getting better. Longer posts were driven by a point to be made, and that I wasn’t losing the focus of that point across paragraphs. By that point I was posting maybe a page and a half, two pages of content, and he told me he was actually interested to read them. I was being appreciated for the increased time and effort, something I hadn’t felt since about the time I was hired to that job I had lost.

In short, I felt like a person. I was acknowledged. Sure I wasn’t able to make ends meet, but the tiny voice I sent into the world could be picked up. Site statistics were going up. Someone was paying attention. And even if it was only that one person, maybe one or two more, I suddenly felt I had an audience. All from a blog.

So I continued. My resolve was strengthened, and no matter how troubled I felt, I scoured the net for something I could grasp onto for two pages, and I dug in. And no matter how ugly the site itself was, no matter how quiet it felt outside my door or disheartened I grew from the few responses and fewer interviews, I kept typing about whatever I could find. I would calculate I wrote over 400 pieces before I gainful employment again (and that includes the one day’s worth of work I had handing out t-shirts on Market Street in San Francisco for an afternoon, that’s a different story), and while the new job only barely paid my bills – I took home less than I was being granted on unemployment, AND I had a short commute – I maintained some semblance of regularity in posting. By that point, there were anywhere between 6,000 and 9,000 unique hits a month recorded on my stat tracker.

But in 2014, I lost all of that content. A mix-up on my part suddenly left me without a domain, though I could have paid a premium to grab it back… a premium I simply couldn’t afford. And after only a minute of thinking, I allowed all of that content – over a year’s work of hard, consistent, DAILY work – disappear. All of the articles, tests, poetry, stories, news opinion pieces – to disappear. Not because I wasn’t proud of it, but because I didn’t “need” it. Sure it would be nice from time to time to see what I wrote in those early days, but it would only be to see just how far I’ve come from the LiveJournal teenage “hey, look at this cool thing” to whatever level I’ve reached now. But if I find myself wanting to reflect on a certain topic again, I can take the time to revisit it with a better sense of what I actually would like to say. It wouldn’t be wrong to assume at least two hours per post back then, so combining all of the blog and professional work submitted I’m sure I’ve topped the 1000-hour mark, and with that experience I can elaborate so, SO much better on politics, current events, faith and religion, or even that funny video I might find on YouTube.

And it’s because of all of that work, the platform I created from absolutely nothing and worked hard to build, the name I created for myself in whatever minor form I’ve created, is why I’m proud to consider myself a blogger. I wear that title like a badge of honor and not any linguistic albatross around my neck. Writing that much, for that long, in that way, has made me not only a better writer than I’ve ever been, but it kept me both sane and focused in the most turbulent time period of my life.

It’s gotten me here, creating this page, writing this post. For whatever that might be worth. To you, my friend, this probably doesn’t mean too much, but to me, this has become an important part of my existence. So thank you so much for being a part of it. And just for the sake of saying it… 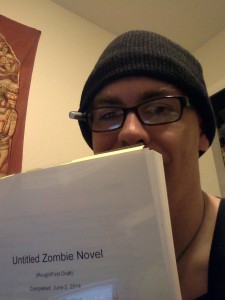 …there’s still plenty of work to be done.

Stand tall, my friends. And may you find your own blog in tough times, whatever form that may actually take.