These are not yet finalized accounts of what to do in the upcoming 2015, but they should do the job well as a starting point. First, a list of books I would like to read, a few more of which may well be added over the next few days: 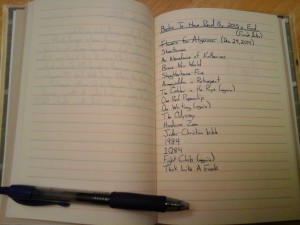 So far, a total of 15 books (with one, Flowers for Algernon, finished a few days ago). Some of these are re-reads, like my current book On Writing by Stephen King, most are there because they’ve either sat on my shelf and never been finished, then a few like 1Q84 sound somewhat interesting and I’d like to push myself to experience and don’t yet own. Last year I counted only five or six books I actually read cover to cover, and in 2015 I’d like to do better, so a list of books I actively want to read will do me good.

The other space is something I have utilized, in a few different forms, over the past three or so years. Simply named the “Points System”, here’s my smaller-page equivalent this year: 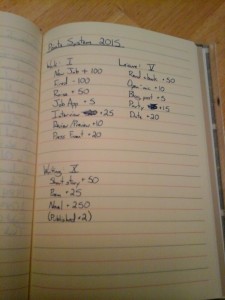 The premise is simple: each action I want to promote directly is worth a certain number of points. Those points, when added up at the end of the month, are compared against a suggested total. When first I tried it, 100 points every month was the goal; every book read, every blog entry posted, every job application sent was worth a small number, which – I remember clearly – added up to 91 points. Seemed a promising beginning, right?

I lost my job in March of that year, and the number of points jumped to about 140. Many more applications, much more writing, it was bound to happen. But during one month, I broke 600 points, and averaged about 450 or more following, which made me re-consider my general goal for that year of 1000 (which was long shattered after six months). Which led me to considering how the whole thing was contrived, adding and adjusting for everything I wanted to accomplish… and setting a high score.

When I was employed again and not sending out so many applications, I didn’t maintain the count as closely, or update as often. The large graph paper notebook I had kept (and still have nearby) didn’t to the trick so well, due to the combination of size and complexity. There were so many items, so much to keep track of, that I gradually didn’t WANT to add new info for the count. Here’s an image of what my page looked like prior to starting 2013, the second year I used it: 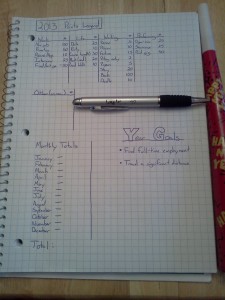 And that was the starting point. Plenty more was added later, and all of those actions came with a unique score. So this time, I’m dumbing it back down a peg. I do recommend testing it for yourself though, just to see how you like it; if you do, please let me know what you think and how you’re using it, I would love to see how anyone makes it their own!

So that’s how I’ll be trying to make my 2015 the best year of my life, how about you? Do you make or break resolutions, or act on a general idea or plan? Let’s help each other with ideas in comments.