Of the many things I tend to keep “ordinary” in my life, one has always been my hair. Specifically my hair. From a young age I’ve generally had at least shaggy, if not long, locks. I remember as a kid that my dad would tease me for keeping long hair and offer me a buzz cut, to which I would politely, then loudly, decline. There were jokes that baldness ran in the family – my grandfather is pretty “light on top” – and that I should either shave my head and get it over with, or “enjoy it while I have it”. (I took the “enjoy it while I have it” approach.)

I’ve had hair that went down to about my shoulders after not cutting it for a year and a half, I’ve had fairly short on top but still long enough to blow it out of my eyes, and generally kept it just long enough to move whenever I moved my head. Simply put, I had the same general haircut for most of my 31 years. So basically, on a stray thought I couldn’t let go, I decided to do something about that.

And now, for the end of this summer, my head doesn’t need as much air conditioning. 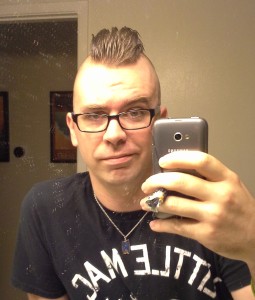 I’m a 31-year-old dude with a mohawk. It feels kind of awesome. And I mean that literally, my head is kinda cold under the air conditioner and I can’t stop touching the shaved sides.

One of the perks of currently working from home is that I can do things like this – cut and style my hair in new, interesting ways, just for the experience in doing so. When the weather starts getting cold I’m sure I’ll grow it back out, but for now, I’ve been shaving the sides to maintain the look the past two weeks and the whole experience is really growing on me. I’ve long had this theory that if I were to totally shave my head, I would only be asked about my prognosis… or maybe that I’d be compared to a roll-on deodorant stick. The look sort of works for my head and face, so I lucked out.

“But why do it at all?” you might very rightfully ask. Maybe my hair was just fine, so why change it? It wasn’t broken, why fix it? And why a mohawk and not (insert hair style here)? And my answer, like many of my answers when it comes to new attempts at creative expression, is why not? It doesn’t change anything, there’s no upside, and maybe it kinda looks funny which makes ME look funny. But it also doesn’t have a downside, doesn’t change anything, and hell, I can joke about it onstage if I choose. All “downsides” are upsides! Hooray!

Though I have to admit, I was worried about how I would appear to people after I could feel the wind directly on my scalp. Would anyone look at me funny, or cautiously, or any other way that might imply I was either a threat or simply deemed “weird” and not approached? Would my friends and family like it, or would they judge me, or even no longer want to talk or spend time with me? Would there be a different set of expectations placed on me, even though I still wore the same clothes, smiled the same smile, tried to be polite and courteous and helpful and welcoming?

In short, would I be perceived as “other”? I mean, after talking with me I can already present as “other” – secular humanist/atheist, openly LGBTQ and promoting equality, I read a fair amount of both novels and non-fiction – so would the hair make any difference at all outside of a possible double-take of “hey… does that guy have, like, an ACTUAL mohawk?”

But knowing that I can only be sure of my own intent in getting my hair a certain way (or anything else about myself, to be fair), the one thing I can’t change is how someone else perceives it. That’s how I was when I kept the previous hair for so long… “it’s just me, if anybody else doesn’t like it that’s on them”. So why should I feel uncomfortable now, with something I decided to do that makes me happy? Why should I suddenly start caring about those people who would make those assumptions?

And yes… all of this stemmed from a haircut. A BADASS HAIRCUT.

Maybe this isn’t as big a deal in the grand scheme of things, but it’s been on my mind since I left the haircutting place. Also, typing this is giving me something to do besides rub the sides of my head. Seriously, it’s an odd sensation. So weird, but feels so nice, and I just… can’t… stop…

Stand tall, my friends. I may need to shave the sides again, but until I do it’s SO FUZZY!