Or at least, the greatest “accidental” song about poker, but I personally can contend that in this case, the song in question is the same.

After years of thinking critically about everything from religion and politics to bookmarks and cheesy video games (seriously, I’m the guy that requested reviews for both Dragonball Evolution and Lollipop Chainsaw), I’d say not only does everything have a deeper meaning and possible purpose, but that sometimes that purpose is something you’d likely never see coming. Take, for example, what people might listen to while they play poker, a serious and strategic game of odds and psychology between players. “It’s not luck, it’s poker.”

I listen to music while playing sometimes, and while sometimes my picks can get me clear-headed and ready for the game, there’s one song on my regular playlist that probably would make people scratch their heads. But in the context of the lyrics, it’s easily the best song I’ve ever heard about the greatest game of wits and gamble I know. So let’s break that down today.

And the song is…
END_OF_DOCUMENT_TOKEN_TO_BE_REPLACED

I have a personal affection for cards. Not only for the games that can be played with a deck (though I do enjoy my occasional trip to the $3/6 limit hold’em table), but because they make excellent bookmarks. They fit in every size of book, hardcover and paperback, they can poke out a little to gauge how far you’ve read through or hide and still find your spot easily. They’re wonderful. 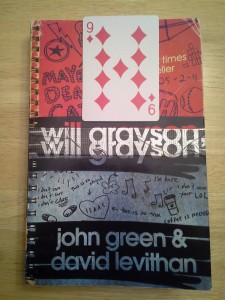 I have this habit of trying to not only pick the right book to read – even if I’ve read it before, in some cases – but in picking the right bookmark. If I’m drawing from a 52-card collection (54 if you count the jokers, which you should never, ever do), that means I’ll take time looking over the front cover, reading the back cover’s story basics, I may even look up reviews on what I’m about to read to figure out how likely it is that I’m going to like it. And from that collection of factors, I select the appropriate card for that book. Is that weird?

END_OF_DOCUMENT_TOKEN_TO_BE_REPLACED

And as it’s my birthday, I thought I would share with you the second draft prologue chapter of my current project… one of the things that’s kept me from blogging as often as I might like. And here it is:

I’ve also written a few reviews and previews lately (and even a basic game FAQ for the first time) that can be found here:

Stand tall my friends, and enjoy some new content!