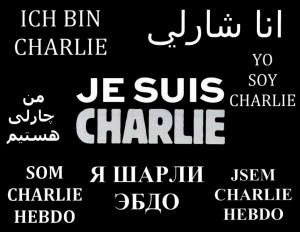 I’ve been somewhat silent lately here (working on other projects can do that from time to time) but I feel like I need to say something regarding the shootings of journalists and cartoonists in Paris a few days ago. For the few of you that read what I have to publish, I feel I owe it to you to say… something. Just for the sake of saying it.

To recap the basics of the story for the four people that may have missed it: in Paris, two or three men (the number isn’t important though) walked into a French magazine headquarters, killed at least 12 people, and are now on the run. Two are out there in hiding – like the cowardly pricks they are, surely if they felt their god was proud of them they’d be continuing to promote themselves – and the third, at least suspected of being part of it, immediately turned himself in saying he couldn’t have been a part of it and claimed an alibi. The suspected reason for the shooting was that the magazine, Charlie Hebdo, published a cartoon depicting the prophet Muhammad.

To anyone that will kill in the name of religion and murder – let’s not sugarcoat this incident as anything but – journalists and cartoonists for having a different opinion, even if you feel it an offensive one, let me tell you: you are only weakening your own cause. There is a line from George R.R. Martin that makes sense here:

“If you cut out a man’s tongue, you are not proving him a liar, you’re only telling the world that you fear what he might say.”

The thing I’m most proud of, living in a country like the United States, is that I can speak my mind on controversial topics. I can say what I want to say. I can poke fun at anything I choose, whether or not it’s in questionable taste; the choice is mine, and mine alone. Yes, I will need to watch myself sometimes, watch my words carefully, try my best to be aware that if I say something really mean or really stupid that I’ll be held accountable for those, but at least I’ll be able to sleep soundly knowing that it’s my choice to make to say those things.

Any entity, group, person or company that tries to tell me I “can’t” say those things not only tries to do me a disservice, but is entirely deserving of my one-finger salute.

The cartoonists – remember, they shot cartoonists – made fun of politics, businesses, individuals, and yes, religion. Not just Islam, but Judaism and Christianity as well (possibly some others, I didn’t see any of those covers). In a free and open society, any topic is fair game. And let’s be perfectly blunt: if your entire ideology can be called into question or insulted beyond rational thought and into murder by a fucking cartoon, you’re not just mental, but an incredible level of ignorant pus, and the world is better off without you.

This grouping of murders isn’t indicative of any of the world’s major religions. Though it was claimed by these cowards as an act for Allah, in the name of Islam, let’s all remember that there are over a billion Muslims in the world, and vast-vast-VAST minority of them are the ones killing journalists and cartoonists in the name of their faith. We hear the news claim these in such a way, and it’s simply an oversimplification, just as the Westboro Baptists are not representative of Christianity (and thank ANY gods for that, ‘cuz those idiots have their heads so far up their own asses they need enemas to wash their hair). The men who killed the writers and artists at Charlie Hebdo are not of Islam… they’re simply aggressive assholes. Let’s be thankful their kind doesn’t last.

Freedom of speech, freedom of press, these are wonderful things. The First Amendment of the United States constitution I hold above all others, and truly feel it worthy of being at the top of that list (and slightly sad it wasn’t included in the first place… why’d it need to be added in?). Those who attacked CH on Wednesday tried to intimidate the world into not appreciating that right to think and express ourselves, and I hold my pen up in defiance. We will not write, or draw, or publish in fear. We will continue. And anybody who doesn’t appreciate that freedom to express oneself and wish to destroy the though in others can fall to whatever hell they believe in.

Stand tall, my friends. And never let them take your pen.