Now, I should say I own a few of them myself. Leather-bound, embossed with an elaborate logo like it should contain either sermons or Lord of the Rings quotes, and one or two others. And those things, the majority of which I purchased myself, were upwards of $20 a pop! And what do they currently contain? Most are half-hearted attempts at starting a physical journal, and one holds passwords for the first 60 or so levels of Crystal Mines II for my Atari Lynx. Not really what Ron Burgundy would’ve bragged about in HIS leather-bound books with their smell of rich mahogany, right?

Here’s the problem with them that I find as a writer: I’m worried I’ll fuck them up.

With a notebook that costs more than a discounted video game, I’m too focused on what I shouldn’t put into them that I never actually put pen to paper and write much of anything in them. It’s so much pressure. For a film comparison, how nervous would you be if you bought a golden plate and was told to freehand design anything you wanted, but the only things in mind is a picture of the Fonz riding a billy goat with wings and fighting the world’s tallest Alvin? You’d hesitate before putting your chisel anywhere NEAR that thing, and not just out of confusion for the situation you’ve found yourself in.

That’s not to say I haven’t bought a metric crapton of books over even just the past few years; I have. 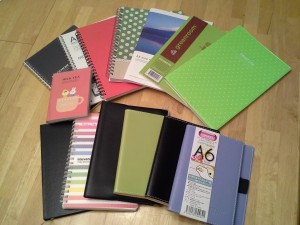 See those? A combination of Target, specialty shops, and Daiso Japan in San Francisco (both Market Street and Japantown, and they make up the vast majority of books there). The pile has enough in it to hold me over for at least a year of writing, and I didn’t pay more than $5 for any single one of them. And even that I deliberated on. There are reasons for spending more than the 35 cents on terrible, cheaply-mass-produced abominations put out by the big companies every year during “Back To School” sales, but anything more than a fistful of dollars is simply too much. And they’re too much because that puts increasingly intense pressure on the person writing in it.

For a writer like myself, I admit to starting a notebook and never fully finishing it. It’s a habit: I start a book with a dedicated focus, then when I need another book for another focus (jokes, stories, poetry, etc) I start fresh, and sometimes forget about the original when I’ve come full-circle. It’s a bad habit I know, but that’s another perk with my less-expensive choices. Why screw up one notebook for $20 when I can mess up a backpack FULL of books at the same cost? ESPECIALLY when that backpack can house all sorts of bad ideas, but find one seriously great idea?

Because that’s what inexpensive, well-produced notebooks (and even the crappy cheapos) give a writer that most non-writers wouldn’t know we need: the combination of an empty canvas and the ability to suck. We NEED to suck. We need to write terrible, terrible things… like half-chewed metaphors. Stories that turn into other stories we didn’t intend on. Anecdotes that won’t make sense to even us after we’ve written them down. Hell, I once wrote a few full pages to a story that I found years later, and not only cringed at how bad it was, I didn’t understand or remember why I was writing it in the first place!

But I have a proposition for writers, for friends of writers, when contemplating a notebook as a gift (sorry for the post-holiday sentiment, but it’s always applicable). If you do decide to buy a nice notebook for someone in your life – say a great-quality Moleskine – I would recommend tucking a note into/with it. And with that note, a challenge.

“A poem a day for two weeks straight, then let (insert name) read the best one.”
“Describe your favorite vacation experience.”
“Who would win in a fight: Garfield the cat, or a cat-sized Matt Damon?”

That should take the quality of prose/quality of notebook equation out of the way, and make that smooth, acid-free paper look less intimidating and more like a messy kid’s coloring book. Let the word flow begin!

One thought on “A Word For Expensive Notebooks”